To Cold Outside, How About Car Sketching?

It's important as representational artists that we make sure to spend some time working from life.  I'll admit I've been rather slack about that this year so I decided to remedy that a bit today.  While today was sunny it was also very, very cold, 23*F when I went out today.  I'll admit, I'm quite the wimp when it comes to the cold so my solution today was to sketch from inside the car.  Even with the engine off it was bearable, (no doubt thanks to the sun beaming through the windows) though the windows fogged up after a while.  Not breathing was not an option so I had to work quickly, besides it was late afternoon and the light was changing fast and would be gone altogether soon. 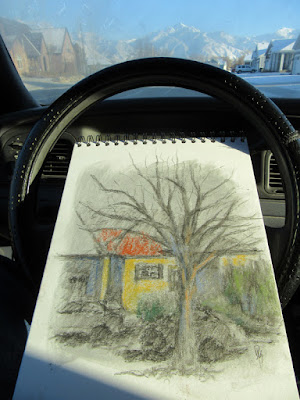 A steering wheel makes a passable easel, though movement is somewhat limited inside a car and that does effect the sketch because it's pretty much impossible to make marks from your shoulder, at best marks were made from the elbow but even that wasn't easy.  Having to sketch from inside the car also limits the subjects available but this wasn't about making a polished piece of art, it was about practice from life, any subject would do as long as it had interesting and challenging shapes.  Obviously I'm more used to sketching classic cars. 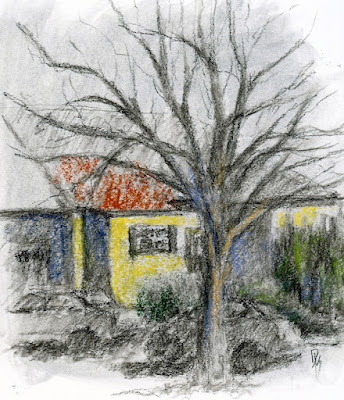 Here's the finished sketch, if you can call any sketch finished.  I used charcoal then added some touches of color using pastel.   I'd rather not sketch from inside a car, but in a pinch it will do.