A Sketch, From Plein Air to Studio

Sometimes making art on location (plein air) just doesn't work out.  There are all kinds of challenges.  There's a time limit, you don't have long before the light changes so much that the scene you started to sketch just isn't there anymore.   Then there are environmental factors, wind, sun, rain, noise, bugs, animals, people, etc, all kinds of things that interfere or distract.  There's also the challenge of having a limited "studio" with you.  You just can't pack all the supplies and materials your studio holds and it seems like almost without fail you forget to pack something.  For these reasons and more my attempts at making a finished work of art on location more often fail that not.  This is a story about one of those failures that was later resuscitated in the studio.

On Memorial Day I decided to spend half the day up in a local canyon to attempt the charcoal sketching techniques I'd been developing in the studio, on location.  I had some success in the studio so I was confident, well nature humbled me pretty quick.  I parked along the highway where I could see this copse of trees growing on the mountainside.  I applied some watercolor washes mostly in green.  My intent was to keep the color subtle, it came out even more subtle than I expected.   People complain about color shift with acrylics as they dry, my experience is watercolor is far worse.   It's darned near impossible to draw with charcoal on a damp surface so waiting for the paper to dry is a bit aggravating.
Remember those environmental factors I mentioned before?  Well, it was a nice enough day, a bit breezy but not enough to be annoying but made things a little cool for comfort.  The big problem I had was noise.  I was sitting just a few feet off the highway and being a holiday, thousands of people were traveling to the mountains, the traffic noise was irritating to say the least and by the end of the morning I had a headache.  The main thing the noise did was make it hard for me to get into the "zone", that state where the world disappears and you are alone with your drawing or painting.  It also didn't help that my subject was on the other side of the highway so I was seeing all those noise makers rushing by.
Finally the paper was dry enough to get serious about applying the charcoal.  The session seemed to be going well enough but I just couldn't seem to really get into it and was dissatisfied the whole way.  This makes it sound like I was having a bad time, I really wasn't.  To steal from the fisherman's mantra; "A bad day of plein air is better than a good day at work".  At the time I just chalked it up to experience and learning and pretty much forgot the artwork I'd produced that day once I unpacked it at home.
Fast forward to nearly a month later.  I was looking for some watercolor paper to use for the next project and instead accidently dug up that first sketch from Memorial Day.  With the passage of time I could see it with fresh eyes and realized there was some potential there.  Instead of starting that other project I started reworking that plein air sketch and this is the result; 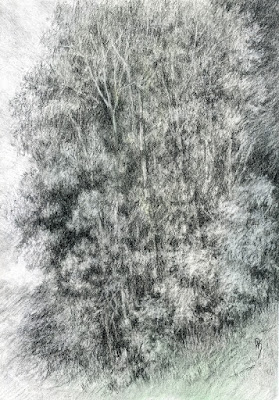 The end result has a classical feel that I really like, it was definitely worth the time to refine this plein air sketch in the studio.  Occasionally I find that I can save previously failed artwork attempts...sometimes, some still die on the easel despite all attempts to save them.﻿