What's that?  Pastel you say?  Yep, that's right, I dug the pastels (dry pastels that is) out and started a new painting.  I'll get back to the "Passed it's Hay Day" painting soon enough but for now I had the urge to get dusty.  I've never tried to do a truck painting with pastels, in fact it's been since last summer that I last painted with pastels.

Since I expected this to just be a quick, "just for fun" sketch I dug out a failed painting and cleaned it off so I didn't have to prepare a new panel.  Turns out part of that old painting will work with this new one.  Also it turned out I was enjoying myself so much that I decided this won't be just a sketch.  Here it is so far; 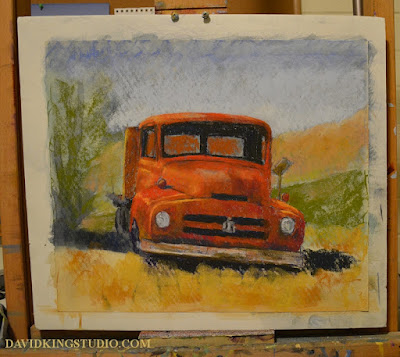 ﻿
The background hills were more or less in the old painting as was the tree/bush on the right, so a little bit of the work was already done for me.  Soft pastels are known for their vibrant color so I tried an experiment, I worked from a photo that I had converted to greyscale which meant the colors were totally up to me!  Once I got started I totally forgot that the truck in the photo was actually green with some red parts and instead painted the whole truck red with some orange accents.  Ya, I know the light version of red is pink, but pink always looks dull and chalky to me so I used a yellow-orange instead.

I had so much fun with this tonight this could signal a return to pastels for me, we'll see.  First I need to finish this painting.  It does need some adjustments to the drawing but I think I can wrap it up in one more session.  Right now the painting is 15" X 17 1/2", I think in the end I'll probably crop it to a standard 12" X 16".