My artwork lately has been largely about experimentation even if the finished piece doesn't look that much different than my usual style, like this one:

This composition was inspired by a scene at Wheeler Farm in Murray Utah.  It's not a copy of that scene, but rather the scene gave me the idea for this composition.  I often go for walks around the property at Wheeler Farm and see potential compositions all over.  I took a couple photos of this area of Wheeler to reference but I actually made a couple thumbnail sketches to test ideas and to focus on the idea that appealed to me, which was primarily the dirt road leading up into the distance around a bend around some trees on a slope.

I finished this painting with my typical application of thick paint using knives but under that was some experimenting.

This first stage was typical, just blocking in the composition with brushes.  This is when I make sure all my lights and darks as well as the colors are work well, though I allow myself to make adjustments later as you can see some differences from the finished painting.

Now you can see some experimenting going on.  I added some drips using acrylic ink.  I also added some high flow acrylic to add some splatters and put some into a small squeeze bottle with a needle tip and used that to add a bunch of lines, in particular in the tree to create small "branches".  I also applied some gel medium and formed it with a palette knife, that's the white stuff you see in the photo, (it dries clear).

Here I've started to apply thick paint with knives, in fact it's over 2/3 finished at this point.  You can also see one other little experiment at this stage, the yellow lines you see in the bushes were added using a paint marker.

Here are some close up detail images of the finished piece. 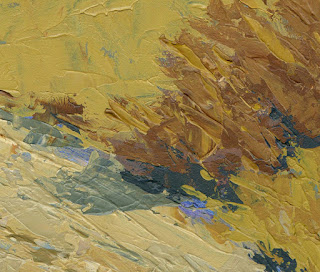 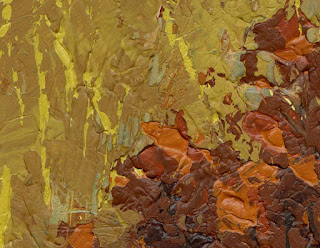 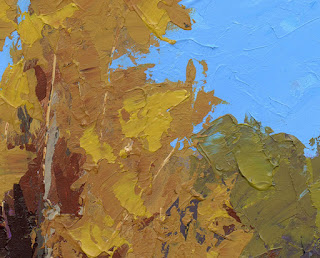