I have a box full of rejected paintings.  Many of them are plein air paintings that just didn't work out, which is most of them since my success rate with plein air is very low.  The majority are studio paintings that I gave up on.  Then there are those paintings that I haven't given up on that just kind of hang around the easel.  Every now and then I put the painting back on the easel, fiddle with it a bit and take it back off out of frustration. I see potential there so it doesn't go right into the reject bin but I'm not sure how to save it, so it languishes near the easel waiting for another shot.  I have one painting that's resting near the easel that's been on and off the easel for over a year, but at least I haven't given up.  Every once in a long while I decide to look through the paintings in the reject bin and see if there's any potential there that I missed.  Today's blog post is about two paintings from these categories that have been saved, one a "hanger on" and one a "reject".

This painting has been on and off my easel for over a month.  I'd work on this painting when I wanted a break from charcoal drawing.  The painting just didn't seem to be coming together.  I thought the composition was solid but the execution was lacking.  Finally I decided it was "do or die" and got the palette knives out and went to town on it and threw lots of thick paint at it and pushed it all around, this is the result; 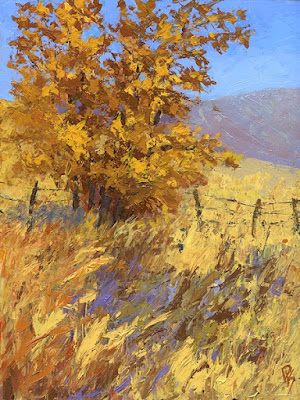 I acknowledge that it's a bit weird to be painting an autumn scene in the middle of spring but I just can't resist the warm colors of fall.  I was pretty happy with how this one turned out so I decided to go though the reject bin and see if there was anything in there I thought I could﻿ salvage with some judicious palette knife work.  I pulled out a few paintings, one an 8 x 10 failed plein air piece made it to the easel first.  Unfortunately I did not strike gold that time.  Either I need more practice with palette knives or not all subjects are good candidates for that technique.  Needless to say I won't be sharing that one here.

However the rummaging through the reject bin did net me one little gem.  I'm not sure why I rejected this one, I just spent a few minutes with it and decided it wasn't half bad. 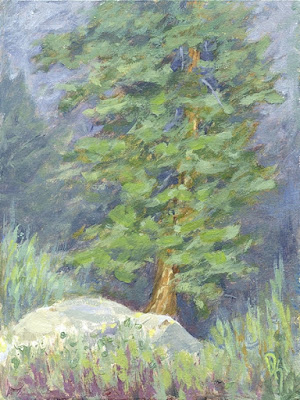 This was originally a plein air piece painted in Big Cottonwood Canyon about two years ago I think.  It was an experiment in taking different elements  from my surroundings and creating a scene on the spot that doesn't actually exist.  In this case the rock was in one area and the tree came from another and I combined them.  I think I moved the other vegetation around a bit as well.  In the studio I just adjusted some values and added a bit more color.

It's a good idea to save your failed paintings, besides giving you something to measure your progress as an artist against, as your skills develop you might find you can resurrect those failures and turn them into something worthwhile.﻿