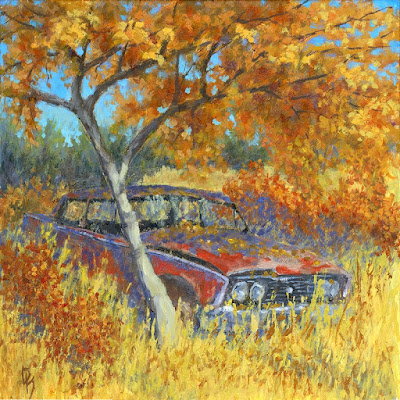 So, to recap: This painting started out as a portrait of a Chinese Elm tree in a simple landscape consisting of a field and a path...boring.  I then added an abandoned car to make a more interesting composition....landscape areas still too plain.  I then added bushes and modified the background, much better but too organized.  Finally on the last session I broke up the bands to make the scene appear more natural.
I'm sorry I didn't take progress photos, I didn't expect the process on this painting to take so many twists and turns.  There is still one question about this painting and it will just have to remain.  Is this a portrait of a tree or a junked car?  Both I guess but I'll live with that even though it breaks the "rules".﻿
﻿
Posted by David King at 9:19 PM