Sketching in the Rain

Mother Nature hasn't been too kind to me lately.  Seems like whenever I have the time and want to go out to paint or sketch she decides we need water.  Today was looking like one of those days as well, however in the afternoon the showers were intermittent and we even had periods of spotty blue sky revealing the sun.  I decided to take my chances and grabbed my sketching gear.   Besides getting some sketching in, one reason I wanted to get out was to scout out some possible painting locations that I could get to quickly after work, so I explored a small section of the Jordan River Parkway that I hadn't visited in a long time.  While exploring a little used "unofficial" path I didn't find any good spots for painting but I decided to sketch this tree on the opposite bank of the river anyway. 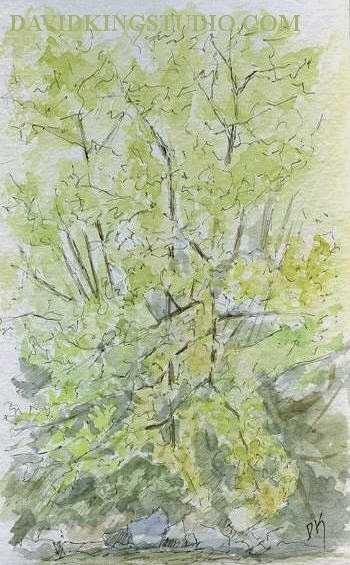 The leaves are just starting to come in which allows me to add some color but much of the structure of the tree is still visible.  That's what these sketches are mainly, just studies.  I'm no watercolorist so I don't expect to create real paintings.  For me, watercolor is just a convenient medium for adding color notes to my sketches making them studies that will hopefully help me when developing paintings in the studio.  Shortly after I started this sketch it started to rain.  It wasn't really a rain, more like a heavy shower.  I could tell it wasn't going last long so I decided to wait it out.  I did have to turn my sketchbook over though while I mentally kicked myself for not getting the umbrella out of the trunk of the car.  To make things even more fun the rain turned into hail but at least the pellets were small and it lasted less than a minute.  And then the clouds parted and the sun appeared and wouldn't you know it, but it was directly in my eyes for the duration of the sketch.  Only in spring can you go from overcast, to rain, to hail and then to full sun in the space if ten minutes. 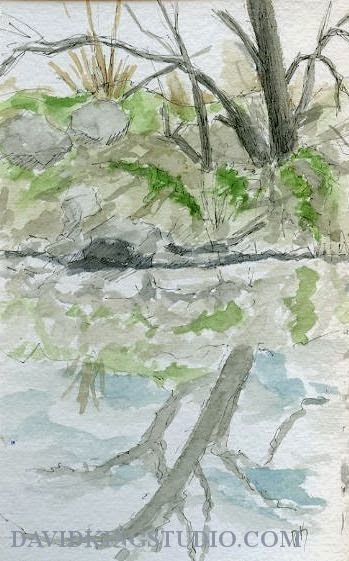 I then wandered over to the other side of the river and found this interesting scene with a tree giving a strong reflection in the water and decided I had to sketch it.  I'll admit, I kinda rushed this one.  I found a stump to sit on but it wasn't as comfortable as I thought it would be.  After finishing the sketch I then started to continue up the path and realized the sky to the North was very dark, so I turned around and went back to the car thinking my sketching session was done for the day.  However when I got to the car I realized all those dark clouds were moving to the East so I decided to chance it and headed back to the path, this time I got the umbrella out of the trunk and took it with me. 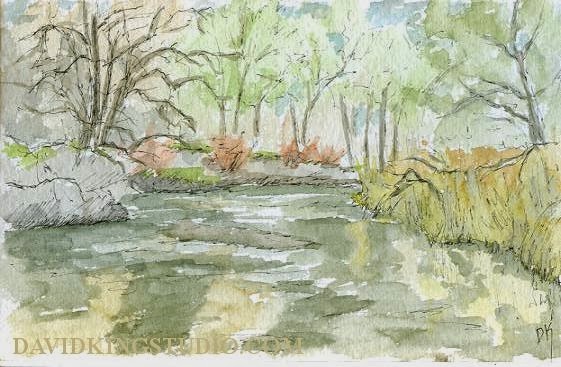 The umbrella did come in handy, it was a light shower that only lasted a few minutes just before I started this sketch but still, it was nice to not get any more wet than I already was.  I discovered a sand bar that was accessible that gave me a real good view down the river.  I suspect this sand bar is under water much of the year so I took advantage, I might return with the painting gear soon before it gets flooded again.  So, it was a little wet and a little cold at times today but it was worth it to finally get out of the house and do some sketching!
﻿