I had the day off today and we finally had some sun and a reasonable temperature after a few days of overcast conditions and snow so I went out and did some sketching.  I went to the Jordan River Parkway again, this time the area near Arrowhead Park.  One of the good things about winter is the lack of foliage exposes scenes you just don't see during the other seasons.  I decided to sketch a bend in the river, this time I got the watercolors out too. 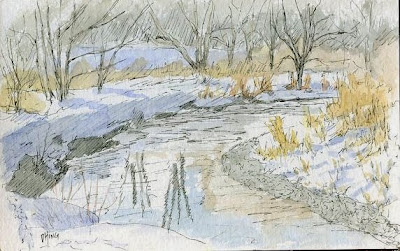 It was still a little cold for attempting an acrylic painting.  I can do a pen and watercolor sketch in 20-30 minutes versus a couple hours for a painting. Not only does acrylic paint not like such low temperatures I don't care for the cold either so sitting in one spot for twenty minutes is much more appealing than sitting there for two hours.  A watercolor sketch gives me enough info to help me recall what it was like being at the scene.  All those bare trees would make a studio painting a challenge though!

I wandered farther into the area up into the marsh.  This is an area that just isn't accessible during the other seasons, it's too wet.  A heavy blanket of snow helped keep me above the moisture for the most part.  I was able to access the back of the pond at the marsh, again something I could never do any other time of the year.  The ground was still quite soft under me so I decided sitting on the stool was not an option and instead did a quick pen sketch while standing; 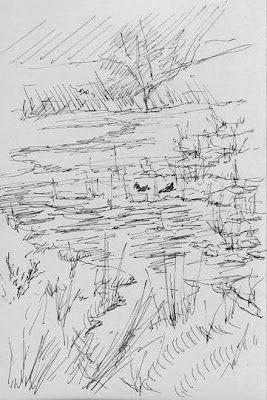 It may not seem like much but doing a sketch, any kind of sketch helps embed the aspects of the scene in your mind that a camera just can't capture.  I scribbled in a couple ducks that were there.  I don't understand that, if I could fly south for the winter I definitely would!