I like my hot rods "old school", which means I like the traditional styling from the late 40's into the early 60's.  To me that era was the epitome of cool in the hot rod and custom car world.  It can be hard to find a car around here built strictly to that style, many come close but then install modern street radials which often kill the look.  I admire a car owner that keeps true to the old school aesthetic, it isn't exactly easy and you have to give up a bit of comfort and drivability, to me the look is worth it. 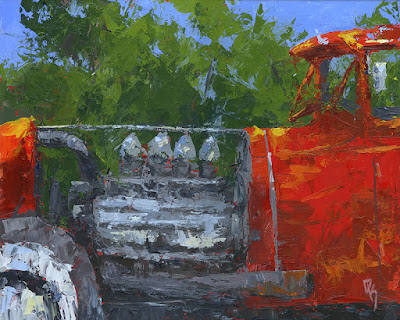 The hot rod depicted in this painting is one of those cars that gets it right.  The early hemi engine makes this ride even sweeter.  The Chrysler corporation hemispherical engines were in the thick of the early overhead valve engine displacement wars of the early 1950's and so were a prime candidate for an engine swap into a Model A Ford or '32 Ford hot rod like this one.  This is one of my favorite local cars, I love it.

I feel this is one of my most successful abstraction attempts to date, as abstract as the engine is I think anybody that's into vintage cars will recognize it as an early hemi...one hot rodded with four single barrel carbs and lakester headers.