Back to the Sketchbooks

I've been neglecting my sketchbooks lately, in fact I haven't taken them out this year much at all, geez, how lazy can I be?  Lack of time is no excuse, especially for me.  I decided I wouldn't waste another sunny autumn weekend day.  However, I got a late start, (that lazy problem again) and knew I'd have less than an hour before the sun hit the horizon so I just took a pen with one sketchbook and headed out to Wheeler Farm.  Using only a pen meant I couldn't get too fussy, my goal was to spend about ten minutes on each sketch.  I also had the goal of trying to quickly compose possible paintings.  I decided to stand while sketching as well in spite of my back problems, this forced me to sketch rapidly also. 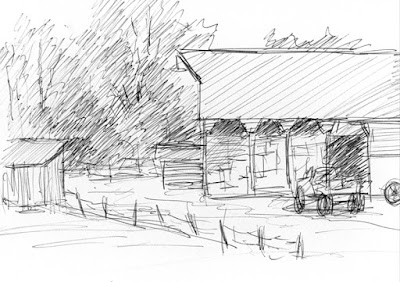 This is the main hay barn, along with my favorite old Dodge truck parked in front.   I modified the fence line to create a lead in.  Unfortunately the cows weren't out in the pasture today. 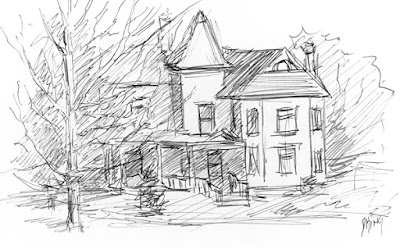 This is the old farm house, a fairly elaborate structure that was a challenge to sketch fast. The only real composing I did on this was just to pick the viewpoint and to eliminate a structure from the background at the right.  I liked how the big tree interacts with the left side of the house.  Yes, it covers some of the house and supposedly that's a compositional no-no but I don't care, I like it, and it adds a little mystery. 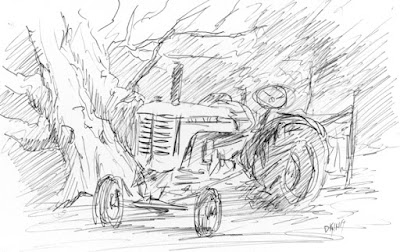 Another of my old favorites, the orange Moline tractor out back.  This makes the third time I've sketched this tractor but from a different angle each time.  I eliminated clutter from the background and overlapped the tractor and tree more than what I was actually seeing.

Even though each of these sketches was done very quickly without editing this outing was very good exercise for both my drawing and observation skills.   These sketches combined with photos and previous color sketches give me plenty of information to make some new paintings, hopefully I'll get to them this winter.

I'm considering starting a daily ten minute sketch practice.  They won't often be outdoors since the weather is less favorable now and the days are short but sketching from imagination or photos is useful as well, it would make a good warm up for a painting session.  If I start doing the daily ten minute sketch thing I'll post the results here so stay tuned.﻿