We are having an unusual autumn this year.  The temperatures have been quite a bit higher than normal most days, even summer-like at times. This appears to have caused many trees to hold onto their leaves longer than normal, however some trees seem to operate on the clock regardless of the temperatures, maybe they are more effected by the days getting shorter and shorter regardless of temperature.  I took a trip up Big Cottonwood Canyon last week expecting to be treated to a magnificent show of color, I was very disappointed. Most of the aspen trees had already dropped their leaves, this time last year they were so bright as to seem to be on fire. I guess you just never know how the weather of the spring and summer will affect the trees during fall. I drove over the pass and into the Heber Valley which on first glance appeared to be mostly green still.  I was getting excited about the prospect of returning in a week or two to paint on the Middle Provo River, however when I got to the river I noticed something odd and disappointing, about half the trees were bare and the other half were still green.  The cottonwoods might still produce beautiful color but it will be spotty.  I've come to the conclusion that it might be best to just stay near home this fall, the best color might end up being right here in the Salt Lake Valley, hopefully plenty of it near the Jordan River, we'll see.  We don't have much color here in the valley yet.  I got impatient and pulled out a photo I took a couple years ago near the Jordan River Parkway and made a painting in the studio. 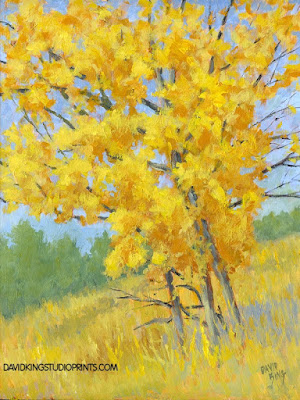 I'm very familiar with this little stand of trees as it is across the road from one of my favorite areas on the Jordan River Parkway in Murray, Utah.  The fall foliage on these trees was an especially bright yellow-orange.  I've even sketched this stand of trees in pen and watercolor.  Open fields like this in the middle of a neighborhood are a rare blessing nowadays, best to document them before they get developed.