I've been a bit lazy lately but not totally delinquent.  I did manage to get out and sketch last Saturday.  I managed to wander over a good portion of the east side of the Salt Lake Valley but ended up at a small nature preserve in the heart of the commercial district of Sugarhouse called "Hidden Hollow".  It really is kind of hidden, I didn't know it even existed until I heard about it on the radio a couple years ago. Everything has just sprouted leaves so it was almost as green as a jungle in there, I found this neat little composition and just had to sketch it. 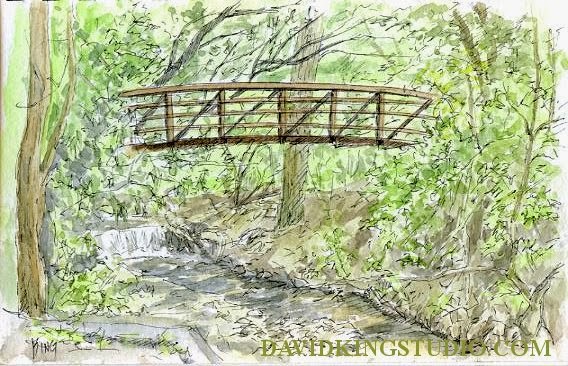 That's Parley's creek that's running through the middle.  I simplified the bridge a bit.  The city of Sugarhouse gets it's name from the sugar beet mill that was built here not too long after the valley was settled and was actually built in approximately this spot, in fact I believe some of the concrete and rock walls I saw lining the creek may have been part of the old sugar mill, I even included just a bit of one of them in the sketch in the lower left.  There are many interesting things worth sketching in Hidden Hollow, I'm sure I'll return.