That's one of the great things about being an artist, you notice the beauty in the "mundane".  Actually, to an artist very little in the visual world is mundane, we are often inspired by the most simple or obvious things  That was the inspiration for this painting, a photo of one of those "mundane" scenes taken in a rural northern Utah town behind a gas station. I'm sure most of the residents of the area pass by this scene nearly every day hardly giving it a second thought. I have to admit though, I didn't even realize the whole scene was beautiful at first.  I saw the tree and liked the shape so I took some photos, unfortunately I didn't have time to do a sketch. Recently I was searching through my photos looking for a subject to try some experimentation with texture mediums on, I needed something simple, preferably natural. I came across a photo that looked promising, then looking closer realized it was a photo of that tree behind the gas station and then realized the landscape it was in was also a good composition and would work well for my next painting. I made almost no compositional changes from the photograph, I did however punch up the color and texture to make the image more vibrant and interesting. The painting was done almost entirely with palette knives, the exception being the clouds and the distant trees. I used heavy gel medium and modeling paste in this painting for the first time. The gel medium was used mostly for the background and the tree, the modeling paste was used in the grasses and foreground dirt. 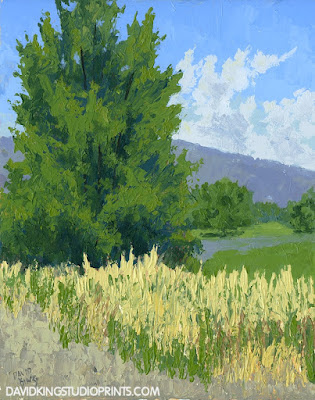 An Experiment in Minimalism

I don't know where it came from but I got the idea of minimalist landscapes on my mind last week so I decided to try one; 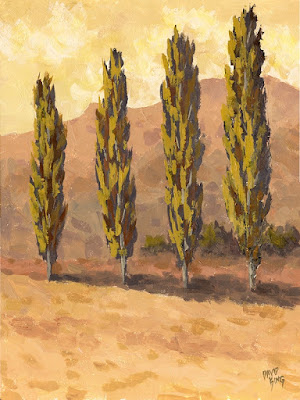 I'm not sure this is really minimalism, but it is definitely much simpler than most of my paintings.  The reference photo was taken in the small rural town of Mountain Green, Utah in the middle of summer at midday. By limiting my palette to warm colors the scene became autumn at sunset.  I also kept the paint real thick so it would retain brushstrokes.  Here is a detail; 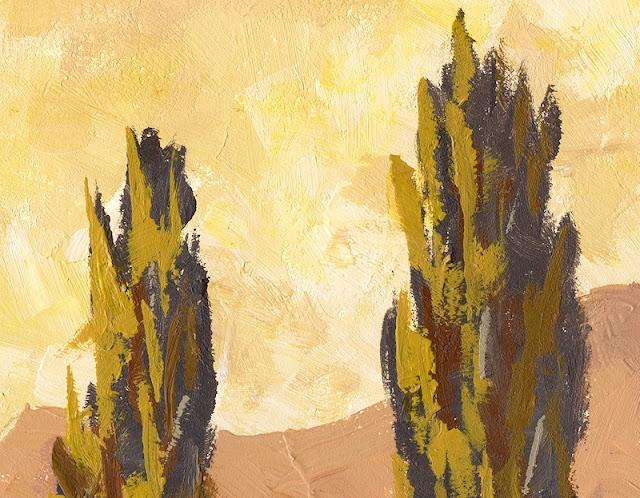