I finished the WIP I showed you in the last post.  This was one of those paintings that practically paints itself, a rare thing. For one thing, nature gave me a near perfect composition and a great color harmony, I just had to translate it to pigment on paper. I scanned this one instead of photographing it and while it did come out better than my photographs it still isn't quite right.  For one thing the real painting isn't nearly as grainy, something about the light passing through and bouncing back that does that.  That effect makes a pastel painting look luminous in person but it makes it real difficult to digitize!  I'll get a handle on this some day, I swear I will!

I started a new pastel painting today.  It's been a while since I've done a pastel painting larger than 8x10, this one will be 16x12.  This painting is based on a photo I took last Friday in the same spot as the first photo in my last blog post. The composition is practically ready made by nature but there were a couple tweaks I wanted to try and so I did a thumbnail sketch to test them; 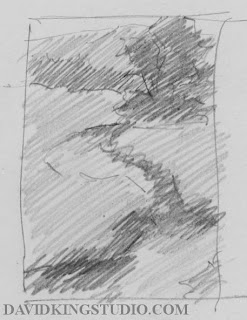 As you can see I just used a plain old HB pencil. I moved the horizon up higher and tried to connect the darks a little better.  I decided to move forward with the underpainting; 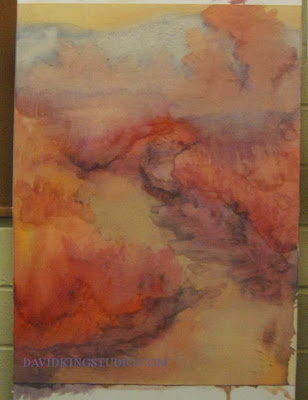 I decided to try using watercolor for the underpainting, something I've never done before.  Watching my Richard McKinley video the other day motivated me to get all "splishy splashy" with my underpainting.  Normally I just use an alcohol wash over a thin layer of hard pastel.  I enjoyed this process and I think it may have made for a more interesting setup for the painting than I normally get, so I'm sure I'll use this technique again if not often.  I only put out a few colors since I was going for a near complimentary color scheme.  I wanted to keep the colors focused on violets and oranges since that is what the final painting will be.  I've found when I get real adventurous with color in the underpainting I just end up covering it all.  As McKinley says, "the underpainting is the set up for what goes on top."  If the underpainting is so incongruent with your idea for the final painting you end up covering it all up, what was the point in doing an underpainting?  I did underpaint the sky with yellow ochre, for some reason I usually like to do that for skys on a sunny day even if it will be mostly covered in blue.  The support for this painting is Uart 400 sanded paper mounted to foam board.

It's early in the game but I'm feeling pretty good about this one, I beleive it will be a winner